As neglectful a mother I’ve been to you, the shame in returning after so long is far less than the sorrows that flood my heart when I think perhaps you’ve perished forever.  I can’t tell you the number of times I’ve been approached at weddings this summer by friends and acquaintances saying they’ve missed “that bizarre thing where you used to post ugly pictures of you and that hairy girl” (thrice).  To which I would reply, “Why thank you! Her name’s Ellen, and she’s really not all that* hairy”.  I was pained to think I may never get the time (20 minutes) or focus (half a Diet Coke) to write another post.  Well, now that Wedding Season 2013 is winding down, and my butthole-of-focus is tightening, I bring you 2GIRLS4CHINS!  Um, again.  Probably. 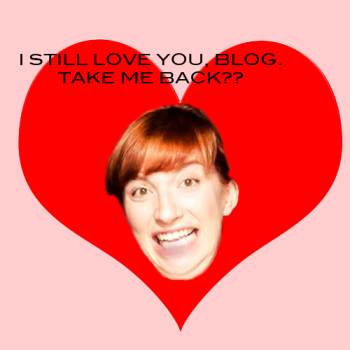 Some things have changed in the nine months we’ve been apart. Though I can no longer play my favorite pathetic, cat-obsessed, single lady card, I can still play a fitness-struggling, cat-obsessed, globby-chinned domestic partner card.  Yes, I now have a earth-shatteringly good man and an obese, irritable step-cat. I hope this works for you.

And so, a new fitness chapter begins…

Domestic partner, out of the goodliness of his heart, got me a gym membership through his work, that  Honeycrisp apple-inventing, interesting crap-researching, and Gopher football-balling U of M.  Lucky for me, their Rec Center is brand-tight-end-ass-spanking new (gross.  I am neither into 20-year-old (or any age) football players, nor sports metaphors.  My apologies).  This behemoth of a building stands at 6 glorious levels, filled with cutting edge workout equipment and gaggles of sprightly, tan, 19-year-old young women alongside beefy, Herculean (however acne-prone) young men. When I was a lass of 18, I was more focused on swiping desserts ‘for later’ from the caf** and arranging liquor runs with my older friends/people I took advantage of for booze runs.  I’m sure many of the U’s young, fit princes and princesses manage to get wasted, order pizzas, pig out on some kid’s birthday cake who they don’t even know… AND maintain a regular workout schedule, but for me, that was too incongruous.  “No point in gym.  Where’re those cookies that I don’t really like, but eat anyway? Where’s the cookie-flavored Absolut?”  Must I mention that St. Olaf leads the nation in svelte, intimidatingly athletic Nordic babes, and I was one of those goofy, uncoordinated, “smear more butter on that lefse” kind of Norwegians?

Luckily, with time and the embracing of my chins, I am no longer intimidated by America’s hot youths… especially since I can no longer aspire to join their ranks.  I appreciate their smooth, buttery skin.   I’m tickled by their raging “holy crap, I think he just looked at meee!” hormones.  They’re learning so much about physics, etc., and life.  It’s sweet, really.  I don’t care that I’m in the minority lump of professors, staff, spouses/domestic partners who hit up the Rec Center.  Do we not sweat the same sweat (if not considerably more in volume and pungency)?  If they think I’m a 38-year-old softball player cum 1800’s British Lit prof, that’s cool.  I’m gonna crank up the Oingo Boingo and show ’em how it’s done.  Or at least how jiggly/pasty they will become.

*compared to most Lebanese men

**usually 2 or more, consumed on the way to the library, which was next door to the caf, where I would go to study***

***nap off my sugar crash